Take Your Instagram Marketing to New Levels With This Cool Approach Social media – you either love it or hate it. And while it seems like every week there’s a new social network that’s all the rage, very few have achieved the staying power that Facebook, Twitter and LinkedIn have achieved. The one exception to those sites is Instagram, which now has 58 times more engagement per follower than Facebook.

Instagram – with 40 billion shared images and 400 million monthly active users – is more than a photo-sharing social network tool. For brands and business owners, it’s another way to tell a story, engage with customers and distinguish yourself from the pack.

Most businesses use Instagram in the way the social network was originally designed: post a photo (enhanced with a cool filter), write a quick caption and include hashtags for searching. But there are other ways to use Instagram to enhance your business and tell a story that will get customers to check you out in a different way.

Use the Entire Grid

Here’s a BIG way to take your Instagram up a notch: Don’t just post one photo at a time. Look at the entire grid as a way to tell a story, and then post photos that are pieces of one larger image. Here are two examples of brands that used this concept to engage users.

To the casual Instagram viewer, it was nearly impossible to see right away what the show was doing. But once more photos were added – and you scrolled through the entire grid – you can see the photos made up a large photo that depicted the main character’s bulletin board used to solve the mystery.

Here’s a look at the nearly completed grid:

How Do You Do It?

While this is a great concept, the logical question is: “How did they do it?” And “How can my business do this?”

Showtime likely did this by starting with a concept and planning it forward. They came up with the idea and mocked up the large image. Once that was done, they used an app like Instagrids, a program that breaks your large photos into a number of square pics and upload them to Instagram.

You can do this for your business as well. Let’s say you want to do a seasonal marketing campaign. Think ahead and map out the entire marketing strategy and images. Once you have the image and concept in mind, break it down to smaller parts using an app.

This trendy neighborhood intersection in Indianapolis is using its Instagram grid in a completely different way. Broad Ripple Ave (@broadrippleave) also uses the grid to show one large photo. But it then takes it up a notch by making its featured businesses clickable to their own Instagram accounts.

Here’s a look at their entire grid:

How Do You Do It?

This approach also requires some forethought about what the entire Instagram grid will look like. And from there, you’ll want to create individual Instagram accounts for each business, brand or product you want to feature.

What’s the Advantage to Using Instagram as a Grid?

The first big advantage to using Instagram in a non-traditional way is it keeps users engaged and coming back to your profile. The whole idea of using social media is to build an audience and keep them coming back. Using the “Homeland” example, by building the bulletin board mystery, they got users to come back to the page every week and see what new clues were being dropped.

The second advantage is the grid looks pretty darn cool! Very few brands are using Instagram in ways other than posting individual photos. Using a grid approach will set you apart from your competition.

Finally, you can cross-promote your Instagram ventures on your other social media accounts. For example, “Homeland” tweeted each time they dropped their new grid clues and included a tracked link to Instagram. This helped them build followers on both social networks.

Using an Instagram grid approach does require some forethought. But with a little planning and strategy, you can distinguish your brand and create something visually appealing to help market your business. 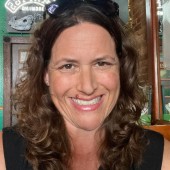 Leah R. Singer is a freelance writer, and helps businesses tell their story and connect with their ideal audience. She is known for uncovering unique angles and hidden gems, and then creating clear and compelling communication that creates impact. Leah writes regularly for The Huffington Post, Red Tricycle, Babble, Scary Mommy, Today Parenting, Beyond Your Blog, Sammiches and Psych Meds, Just Be Parenting, BlogHer, and many other publications. 8 Simple Changes You Can Make to Increase Sales on Instagram